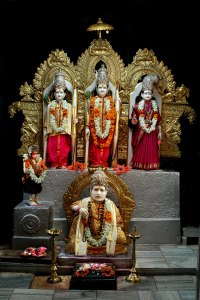 Contentment is Found Only in God
What appeals to our sense of logic and also tallies with our experience, can be accepted as the truth, disregarding opposing thought or advice. For this we must be sure that our logical faculty is reliable and experience broad-based. In today’s world we find that thoughts and intellect can be easily swayed; to maintain them against persuasion or opposition is by no means easy. Even right-minded persons may have their opinions challenged, modified, reversed. I do not ask you to accept a statement merely because it appears in the scriptures, nor because I make it. But I put it to you, consider your own experience, and decide whether you wish for real contentment; and you will arrive at the conclusion that such real contentment is not to be found anywhere but in God, the Supreme Being. If so, determine that you will stick to this conviction, come what may. I shall narrate to you a true incident illustrating what firm determination can achieve. In a certain town there lived a man of about sixty, who employed his bright brain in deriding others, by putting disconcerting questions. Once a visiting sadhu was delivering a highly interesting address on devotion, and the audience was listening with rapt attention, when this man suddenly rose and put an utterly irrelevant question: ‘Sir,’ he said, ‘instead of talking about futile theoretical things like God and devotion, tell me about a matter of close concern; when will this country achieve political independence?’ The sadhu calmly replied, ‘We’ll talk about it later, but tell me, now you are pretty advanced in age, and there is no knowing when death may pounce on you; have you ever thought of achieving independence from the thousand and one bonds that will have to be severed, and the bodily ailments you may have to face, when death finally closes His clutches on you?’ This counter-question not only silenced him, but set him thinking. He called on the sadhu later and said, ‘I had never thought about those crucial points before; but now tell me what I ought to do.’ The sadhu said,’ Eschew talking for two years, and engage yourself in ceaseless nama-smarana.’ He followed the injuction resolutely, and when, after two years he met the sadhu again, he said with tears in his eyes, “Sir, intense nama-smarana has given me thorough contentment, and now I need nothing more”. * * * * *

This entry was posted on Tuesday, August 11th, 2009 at 3:32 pm and is filed under Uncategorized. You can follow any responses to this entry through the RSS 2.0 feed. You can leave a response, or trackback from your own site.