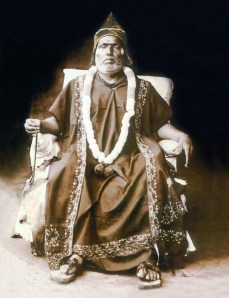 Man commits an error or sin, and implores God for pardon. It is evidently futile to expect such pardon if the sin is persisted in. Pardon is almost taken for granted; if the significance of the word pardon is properly understood the word would not be used so lightly. It is plainly an attempt to cheat God, who, however, sees everything, including our innermost thoughts. God is so great, indeed, that He cannot be encompassed by our logical argument nor our puny intellect. He can only be propitiated by utter submission; and I would exhort you to adopt such submission. Contentment is entirely independent of external circumstances. Reading the scriptures, committing book after book to memory, listening to learned discourses, none of these can give contentment unless put into practice. Nama is a necessary complement. So, completely surrender yourself to God, and repeat His name with love and persistence. A moneyless pilgrim of Pandharpur was trudging wearily on the way to that place when a motor car drew up. Seated inside was an obviously rich man, with liveried servants. The party, it seemed, was also bound to the same place. The poor pilgrim thought to himself, ‘Here I am, devout and sincere, making my way with difficulty, while this man, grown rich with his dishonest dealings, rides in a luxurious car! How unjust of you, O Lord!’ Just then the car door opened, and out came the ‘rich’ man, supporting himself with great difficulty, leaning on two of his servants because he was lame. Then it occurred to the poor pilgrim that it was better by far to be poor and to have two sound legs to trudge on, rather than be rich and lame and drive in a car. Generally we fancy that a man who has something that we lack must be happier than ourselves. This is evidently a fallacious fancy, for the other man may be having a handicap unimagined by us. And if the other man thinks that he is happy with his possession, he may well be under a delusion, like a drunken fellow. To be contented with the prevailing situation is the only way to loosen the grip of the attractions of the world. Let us therefore accept whatever situation it pleases God to keep us in; this will definitely hold the upsurge of both pleasure and pain in check. * * * * *